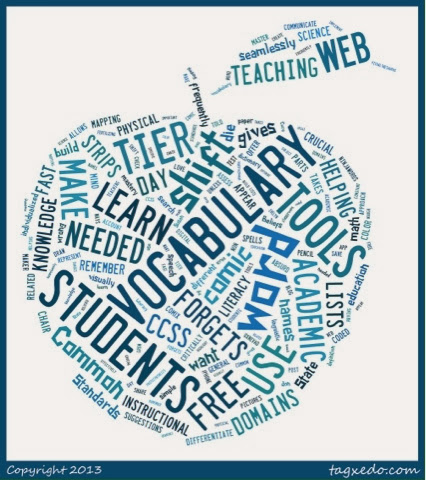 We did a science test this week. I decided, mid stream, to use it as formative assessment rather than summative.

Translation: I realized I hadn't taught all I needed to!  Argh!  Oh ya....quality first time teaching! *slaps hand on forehead*

I had asked my students to memorize a list of words that are part of a science experiment. "Spelling counts!" I said. As a surprise, I threw in a line where they had to write what each word meant. After doing approximately a dozen experiments and using those words every time it should be a breeze, right? That would be the easy part.

Boy, was I wrong! Some kids got some of the words, but way too many couldn't really explain what the words meant. They had diligently memorized a list of words that meant nothing to them.

Screeeeech! The words of Hetti Roessingh rang in my ears. Clearly, I just can't assume kids understand the academic vocabulary we use, even if we use it again and again and again. Time to put on the brakes and talk about these words.

We started this AISI project a year ago (or was it two years?) I was very excited about it. I love words! Being able to focus on the small building blocks of language is beautiful! Words are beautiful.

Then the province took away the funding for everyone's AISI projects. I promised myself I would continue. But alas, it has fallen by the wayside.

This week, more important than the list of 10 words all the Gr. 3 teachers got together and so wisely chose that I have barely covered, it was important for me to focus on those seven science words.

We talked, we repeated, we re-explained, we found similar words, we practiced. And then when we did the test again, the results were much more comforting to my teacher heart. Now they got it. Many of them even got 100%.

....Except for one.
One student could only pull out four of those words. And even more concerning, only one definition was attempted. This one had me scratching my head. Why??! Back to the drawing board. New plan: we will draw pictures, play games, practise some more. And rather than write them, what if this student picks out the 7 words from a pile of 10-15 science words? And then what if we match the words from a pile of cards with definitions?

At first, I thought this might not be fair. After all, with practice everyone else got it! Then again, for someone who didn't learn English from his parents, who do doesn't speak English at home, and for whom these words really may just be jibberish, perhaps having to write them all down isn't fair either.

It made me think of a play I went to earlier this year with my son. It was called The New Canadian Kid. To help the audience understand what it is like to be the new kid everyone in the play spoke jibberish, except for the people new to Canada. They spoke English. It was a fascinating experience. I could really see how frustrating it was for the main character not to understand what was being asked of him, because I couldn't understand it either - even when the other characters said the words slower and louder! (Duh!) It really helped me realize what it must be like to sit and listen to someone like me who loves words and loves books and reading when you struggle to understand the simplest of words. It brings a whole new twist to things to consider before teaching. I am grateful for the reminder.
Posted by Dawn at 7:20 PM