Why You Should Be Reading Children's Literature

Children's Literature does not shrink away from difficult topics It teaches lessons that as adults, many of us still struggle with. Authors find brilliant and succinct ways to entertain, teach and create memories we hold on to for a life time.

Donalyn Miller, author of the The Book Whisperer, lists reasons why you should read kid's books:

1. It's fun
2. It keeps your imagination active.
3. It strengthens your relationship with the children in your life who read.
4. It sets an example for the children in your life, making them more likely to become readers.
5. It clues you in on cultural references that you may have missed (both current and classical).
6. It's fast. Children's books are usually shorter than adult books, so if you don't think you have time to read, you DO have time to read children's books.
7. It allows you to read across genres. Children's books aren't limited.
8. Its like time travel--it's an easy way to remember the child you once were, when you first read a book.
9. It's often inspirational--reading about heroes and bravery and loyalty makes you want to be a better person. And couldn't we all do with some of that?
10. Did I mention that it's fun?

Join us for our Children's Literature Book Club on the last Tuesday of each month. Contact dawn.ackroyd@ffca-calgary.com if you are interested.

Email ThisBlogThis!Share to TwitterShare to FacebookShare to Pinterest
Labels: Reading

I ditched the novel study booklet finally! I hope to never go back. I used the novel to teach sign posts, Notice and Note style. We talked about theme. We made connections. At the end I was tempted to have them illustrate their favorite scene...but then decided against it. I want to create authentic reading experiences for my students and as an avid reader, I've never illustrated my favorite scene after finishing a book so I ditched the idea.

These were some of our conversations:

Student: Guys, can you think of any movies that don't have a villain? Does the villain ever win?

Discussion ensues. Movies are thrown around. Villains are identified. Winners of conflict, it appears, are never the villain.

Character lesson: Check. Don't be a villain. It never pays off.

Student: It reminds me of when my parents had a new baby. You know how it is. They have a new baby and they're all excited and they spend all their time with the baby and kind of forget about you. In time, however, they come back to you.


Ivan is relatable:
Student: I like Ivan. He's kind of like me. He gets frustrated easily, but he isn't fierce about it. He keeps in control. Usually, I do too but I'm still mad.

Ivan has a poor memory. His memories slowly come back to him. We learned that when an author interrupts a story with a flash back there's a reason for it. We had some great discussions about memory moments:

Student: It seems like Ivan's memories are always triggered by something.
Me: What is an example of a trigger?
Student: He wants to protect Ruby and so she is a trigger for his memories.

We were pretty horrified at his memory of how his parents died. Why did the author share that memory? It made him angry! It moved him to action to do something to save Ruby (and himself). This is when his painting project started.

Mack: Villain?
Thinking back to our conversation about westerns and villains in movies, we were led to a discussion about whether Mack is a villain or a hero. This is always an interesting discussion with this book. When we came across a picture of Mack with Ruby near the end of the story, they were surprised at how the author portrayed him. I had to admit that wasn't how I was imagining him either. There were a number of comments abut his appearance that suggested everyone thought he was terrible. I re-directed their judgment by asking them for examples in the story that have shown that Mack is a bad guy. It took some time, but they were able to come up with a number of examples of poor character. It was agreed. He is a bad guy. We couldn't quite agree on villain since most villains are wolves, witches and ogres and he isn't quite one of those.

When I was a kid we weren't allowed to use calculators in class. You were expected to figure out calculations on your own. After all, you aren't always going to have a calculator in your pocket, they said. Well, smart phones have certainly changed that. The world is changing faster and faster all the time.
I have adjusted the way we do research in our classroom. As a grade level, we used to be adamant that students had to go to the library and have a book for their research. It was always a big ordeal. This year, with the pandemic and libraries being closed to visits, we decided we could use the internet as our main source for research. We learned about the importance of verifying information, considering the source and doing a lot of searching - all time well spent. Interestingly, I think the reports they wrote this year were better than any in previous years!

I see these changes happening in my classroom in many different areas. We have been reading The One and Only Ivan lately. We read that Ivan has been in his domain 9855 days. I asked our math super star how long that is in years.

Superstar: Oh! I'll figure it out right now. Can I do it while I listen to you read?
Me: Sure!
Superstar: Wait. Should I count leap years?
Me: How about we just use the same number for each year to keep it simple.
Superstar gets to work while we continue reading. Soon he interjects:

Quiet Student interjects: Excuse me. I searched it up (this is the 8 year old term for 'I googled it..") and it says it is just a little more than 27 years.
Superstar: Cheater! I'm not even listening to you!
Me: Well, how about you keep going and we'll see if your answer matches. It's always good to verify information we find on the internet, right?

So the question is, who's the better learner?! Some would definitely side with my superstar and the truth is, he has some great skills. However, if they both get to the right answer, does it matter?

I was discussing this with my daughter and she said, I just read about that for one of my classes. She sent me the article. It gives great food for thought. It also reminded me of a book I read years ago by a Canadian author I had the chance to listen to. Time travel was involved (not one of my favorite genres) and the main character witnessed the beginnings of feminism and people struggling with accepting Henry Ford's horseless vehicles. It was preposterous! What were wagon wheel makers going to do if everyone started driving his cars?!

My meditation this morning really struck me and I just needed to write it down. This is by Tamara Leavitt and I found it on the CALM app.

Recently, I had a conversation with a friend about the importance of creating boundaries.

Most of us strive to be nice. We want to please people and be accommodating. The question is, at what cost? If we don't honor our own needs and take the initiative to create boundaries for our self, resentment arises... and that doesn't serve anyone.

We are invited to social events that we don't feel like going to, but we still say yes. Our family, our friends expect us to act in ways that don't feel comfortable, but we do our best. We're asked of our time when we're busy with deadlines. Many of us have a difficult time saying no when it's what we want to say most. We're concerned people will judge us. We worry about repercussions or missed opportunities. There's this sense that we owe an explanation. But do we? Isn't okay to say no when that's what we mean?

As Brene Brown said, daring to set boundaries is about having the courage to love ourselves even when we risk disappointing others. So what if it were okay to disappoint others if it meant honoring your own needs? How would it feel to trust that you know what is right and best for you and say what you really mean. Perhaps what's necessary is to realize that sometimes when we say no to others, we're saying yes to ourselves.

The next time someone asks something of you and you really want to set boundaries, perhaps remind yourself that saying no can be an act of self-care. 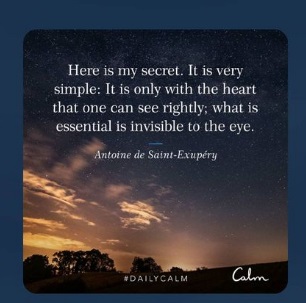 Email ThisBlogThis!Share to TwitterShare to FacebookShare to Pinterest
Labels: relationships, self care

After gym, my class was lining up and the big topic of discussion was who is The Cat In The Hat. Someone said, "It's probably the principal." Another child (who knows everything about everything!) said, "No. It can't be her. I heard she got a part-time job so she probably isn't even here." There were shoulder shrugs from some and nods of approval for others who know that this student does always know.  LOL

Gretchen Rubin has many labels for people. One category is larks and owls.

Larks are early risers. They get up early and get their best work done in the morning. Owls are most productive at night.

I'm definitely a lark. I've been reading a book called the The 5 Am Club. Getting up extra early intrigues me, but until today, 5 am seemed a little extreme. I am someone who really needs 8 hours of sleep a night so to get up at 5 am I'd have to go to bed at 9 pm, which isn't always conducive to participating in activities with the rest of the world. 10 pm seems more reasonable to go to bed, but that means 6 am is the best wake up time. I will have to finish reading the book to find out if I'm convinced, but today a friend posted this. It is persuasive, if you ask me! 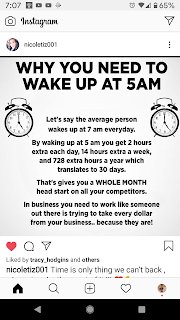 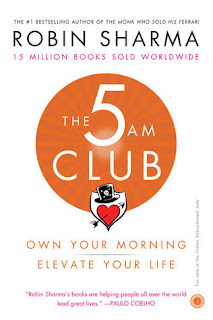 Email ThisBlogThis!Share to TwitterShare to FacebookShare to Pinterest
Labels: Reading

They say that if you read to kids, they start to recognize authors and trends in stories. It's working! Today we read one of our Open Court stories, The Cat Who Became a Poet. We were flipping through the story to get some ideas of what is about and one of the kids said, "That witch looks like the pictures in Roald Dahl books." Quickly, someone grabbed one from their book box and said, "Hey! Quentin Blake's name is on this Roald Dahl book and it's on this story!"

Later, we read a story called Elinor by Barbara Cooney. They recognized the name right away because she also wrote Miss Rumphius, a book we read before the break. They had remembered that Barbara Cooney liked to write stories about family and so they had some guesses about what Elinor might be about. Sure enough, they were right!            Be still my heart!! I love it when a plan comes together!