One of the great things about the JUMP math program is the games that give students more opportunity to practice skills. Today we were practicing ordering and saying four digit numbers. Sometimes it gets a little noisy, but there is no question about everyone being on task! Worksheets do the trick, but games are definitely more fun.

In this game they had to roll a dice and create a true statement (_  _ _ _ < _  _ _ _). They had to put the number rolled on one side of the equation, then the number rolled on the other side of the equation. If the statement was true after they had filled in all the blanks, then that student got a point. After that, they switched. The other person rolled the dice while the first student wrote he numbers this time.


For those who were having trouble figuring out how to say four digit numbers, I would just to stand by their desk and listen to them as they played the game. Now and then I would have to correct someone, but it was interesting to see how when they played they said the numbers correctly more often when playing the game than when we were doing it with worksheets. I heard students helping each other to say the numbers correctly well into the hundreds of thousands. I also heard:


“I’m going to put that 1 in the ten thousands place.”


“I always put the highest numbers in the ones and tens place.”


“How do you say this again? One hundred twenty-three thousand, four hundred and ninety-two?”

After they had achieved four points we added another place value spot so they were doing it with numbers in the ten thousands, then numbers in the hundred thousands. Nothing is more exciting to gr. 3 students! I told them that the government thinks students this age can only handle hundreds. They totally disagree! 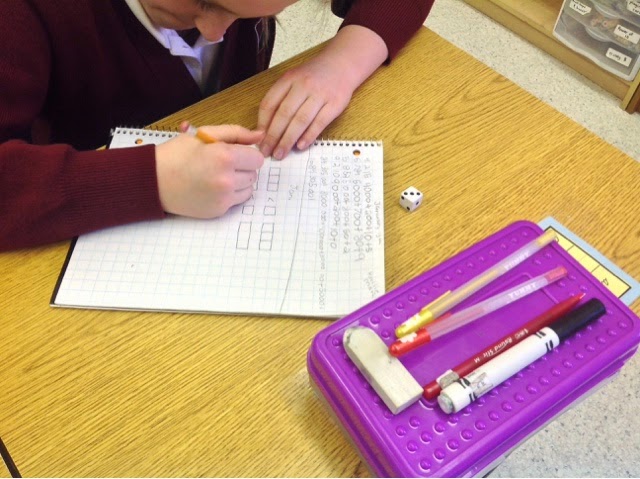