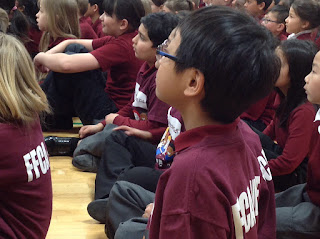 Calgary Opera came to our school today and performed  Cinderella. I love watching students during these performances because they become entranced! A play is way better than TV, for sure.

I loved our music teacher's lesson shared after the story: kindness matters. Cinderella could have been nasty to the step sisters after she ended up marrying the prince. Many would say they didn't deserve any kindness...but she was kind anyway. We should all be a little more like that.

What is behind the black curtain?
- Cooper
How did you change dresses by dumping the sparkles?
-Austin
I saw the prince behind the stage.
-Joshua

Theatre is like a live magician. Everyone wants to know how the tricks work! I especially like watching these kinds of things with kids because they ask the questions I want answers to too. Cinderella changed from her work clothes to her ball gown in a flash, right in front of us. Although, after the play, when the kids asked about it, Cinderella really didn't divulge the secret. She just added to the mystery by saying they dumped sprinkles on her to make it happen.

I liked the piano.
The apple you threw, was it real?
- Raheem

The pianist was amazing. I was enthralled with his skills as well!

Why didn't you kiss?
-Aleah
Did you kiss Cinderella's hand or not?
-Areej

I was a little worried this would happen in the play. I can see chaos totally erupting if anyone kissed on stage at school! Kissing someone's hand is enough for us!

Kids always seem to want to know how old the actors are. I have a theory that they are so amazed by people older than them doing what seems like imaginative play so well that they get fixed on the question or whether or not these are adults.

Why did you pick our gym teacher as the step mother?
- Kaeleigh

They dressed him up in a big hat and a hugs fancy scarf swung across his shoulders. He'd stomp out and point his finger at the badly behaving step sisters. Roars would erupt from the students!